We've been working with an engineering company to develop sales performance, and I've just been speaking to a company that delivers market research services. Each has, on the surface, a very different issue.

The engineering company wants to grow, but its sales team don't yet have the skills to work at a higher level than they already are. They are moving out of the local economy and coming up against national and international competitors who are stronger, slicker and smarter.

The market research company wants to grow, but its market environment has changed dramatically in the past five years. Where the sales team used to account manage agencies, they now sell direct to end users, where they are facing competition from new market entrants.

Whilst these two situations seem very different, they are in fact examples of the same underlying issue; that sales is part of a culture, and when that culture changes, sales behaviour must change otherwise you'll be out of business.

Win a Copy of Genius at Work

Why not enter our brand new competition and win a copy of Genius at Work? 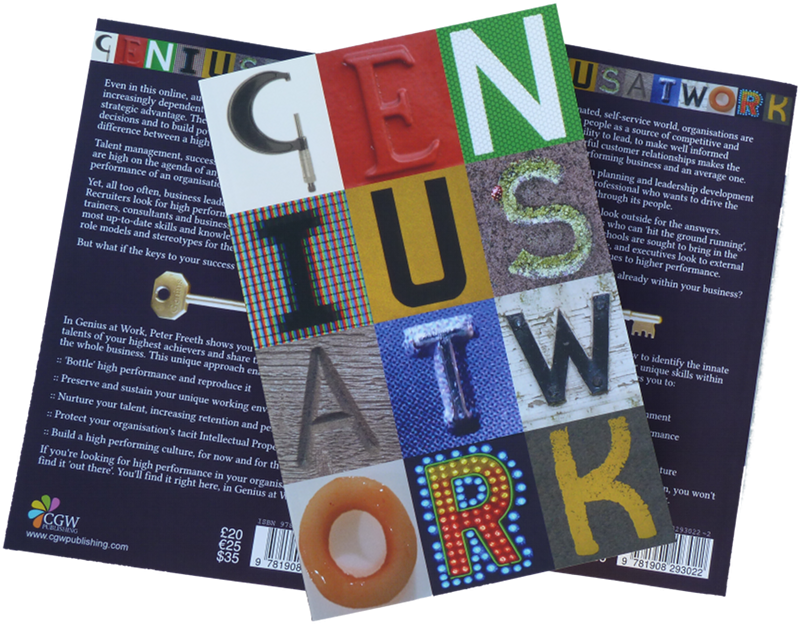 A book that will show you how to reveal and reproduce the hidden talents of your highest performers?

What do you need to do to stand a chance of winning this fantastic book, worth £20?


And that's a genuine paperback book too, not an ebook.

Most of all, no-one can figure out exactly what it is that they do that is different to what anyone else does. It's as if they have a magic wand.

Then, send us your entry, describing what it is that this person does that is so special and why it would make a difference to you and your organisation if you could reveal their secret.

The winner will be judged as  "the person whose talent makes the biggest difference to their colleagues and customers".

Multiple entries per organisation are permitted

In the event of a tie break, we may select more than one winner

Entries must be made on the official entry form, available here

The Importance of Observation


A SME furniture manufacturer hired a new quality manager who had an interest in lean manufacturing, so he started watching people as they went about their jobs.

The man was walking 4 miles a day.

He wondered why the man was cutting softwood when chipboard would be more than adequate.

Apparently, 13 years ago, the man had tried chipboard and it caught fire during cutting. The man announced that you can't cut chipboard, and that was that.

The quality manager tried an experiment. He put the correct tool in the machine and set it to the correct speed. It has safely and accurately cut chipboard ever since.

Over the past 13 years, that amounts to over £9 Million.

This is lean manufacturing, which in turn is very similar to the 'time and motion' studies of the 1950s that I mentioned in Genius at Work.

The manager is slowly revolutionising the whole operation of the manufacturing business. For example, a piece of furniture wasn't quality checked until it reached the end of the line. If the person doing the first part of the assembly made a mistake, the whole unit had to be taken apart to correct it, or the whole thing was scrapped.

By introducing a quality check at every production stage, the manager increased the company's quality rating with their main customer from 15% to 89%.

In every business, there are things that people have declared 'don't work', and no-one has ever asked if that is still true.

What are you ignoring in your business?

Posted by Peter Freeth at 06:41 No comments: