Looking Forward to a Stress-Free 2015?

I bet you are. Stress is a nasty thing. It has been shown to shorten the 'telomeres' that protect the DNA in every cell in your body, leading to a measurable reduction in your body's cells ability to reproduce. That means an early death. Stress will kill you.

But how can you reduce stress, when it's not your fault? It's because of the economy, or your nasty boss, or your family, or your bank manager, or some other external pressure. Nothing you can do but grin and bear it.

Stress is your fault.

Here's why. You're lying to yourself, and your lies create stress.

The electrical part of your body, usually called the nervous system, activates the mechanical part i.e. your muscles, which act through a system of levers to convert small electrical inputs into various mechanical outputs.

What happens when you try to get your body to do two competing things at once?

Two complementary things; no problem. I can type this post and listen to Shrek 2 at the same time, because those tasks are not in conflict. I can pour hot water into my mug with one hand and put a teabag in with the other. Two hands, two tasks. Easy.

Part of your mechanical system reproduces what you know as emotions. Feelings. A combination of physical movement and the release of hormones into your bloodstream. As a result of a certain configuration of your nervous system, you feel a certain way.

So why is your stress caused by the lies that you tell yourself?

Because you say that you're going to do something that you know full well you have no intention of doing. You might want to do it. You might know that you really ought to do it. Someone else might really, really want you to do it. But in your heart, you know that it's not going to happen. So you say one thing and do another.

It's the start of another New Year, and you fancy a change. You look around your living room, and with the Christmas decorations gone, the decor looks a bit tired. So you imagine what a new colour scheme would be like. You imagine some new furniture. That book case in a different place. A new rug. And as you imagine that, a desire map is configured which guides you to the January sales and in no time at all, your living room is all fresh and shiny again. In short, all you had to do was imagine what you wanted, and your unconscious mind automatically resolved the difference between what you saw and what you wanted to see. It's what your brain does, naturally, all by itself. 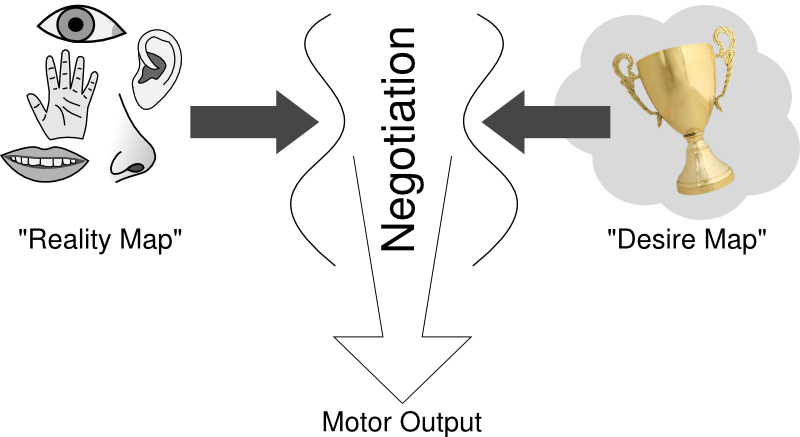 When you are unable to resolve the conflict between these maps because of some external constraint, you feel frustration. You want a promotion, but your boss won't recommend you. You get angry, impatient. You look for another way, perhaps even find another job. Your feelings of frustration and motivation all arise from your mind's natural process of moving Heaven and Earth to resolve the difference between your desire map and your reality map. If there's one thing you're good at, it's getting what you really want.

Someone asks you to do something, so you say "yes" because it's easy to say. Later, you realise you can't do that thing. Do you stay true to your word, because it's what you promised, or do you change your mind because your commitment is no longer convenient for you?

Do you say what you think someone else wants to hear? Even though it's not what you really mean?

Your desire map now represents two different configurations of your system and forces that system - your body - into a state of conflict or stress. You have told your body to do two conflicting, competing things at the same time.

That's the source of your stress.

Stop lying to yourself.

You want to top having superficial, shallow relationships that prevent people from discovering what an unpleasant person you are? You want to get off the tiring merry-go-round of being nicey-nicey to everyone to show how fantastic and capable you are?

Stop lying to yourself.

Stop lying to yourself.
Posted by Peter Freeth at 05:41