I’m sure you can think of someone you know who you would describe as a perfectionist.

While that person may justify or rationalise their behaviour by saying that they want “the best” or they want everything to be “right”, what they’re actually experiencing is a fear of failure, or more likely, a fear of being judged as a failure by a significant person in their lives, usually a parent, sometimes a teacher.
People learn to be perfectionists when their parents show disappointment, so as a child, the perfectionist learns that whatever they do, it’s not enough, or it’s not good enough.

The problem is that the child has no idea what would be good enough, so the child learns to keep trying in the hope that, one day, they will hear those magic words... “Well done”.

Those words never come, and they never will come. As the child becomes an adult, they internalise the sense of disappointment and the need to do more, to do better. If anyone else says, “Well done”, it doesn’t satisfy the need because it’s not coming from the significant person, and if the significant person says, “Well done”, then it doesn’t count because they’re only saying it, they don’t really mean it, and in any case, the perfectionist made them say it, so it wasn’t genuine.
For the rest of their life, the perfectionist is trapped in a constant cycle of trying to prove that they’re good enough to people who didn’t ask and don’t care, as a substitute for praise from the one person who matters most.

The most important point to bear in mind when coaching someone like this is that perfection is not a thing, and it is not an end state that can ever be achieved. Perfection is actually a process, one of perfecting, and the process has two main phases which form an ongoing, perpetual cycle. 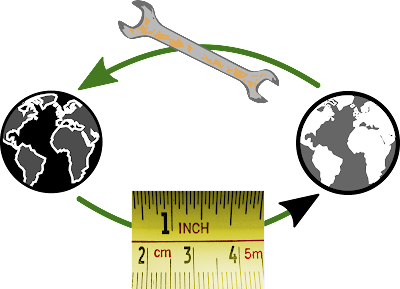 1. Something that you control and can change
2. A standard
3. A measure

Let’s say that you are an art forger, and you are creating a copy of the Mona Lisa for a customer. Would you attempt to do this from memory?

What if someone just described the Mona Lisa to you? Would that be good enough?

What if you painted what you thought the Mona Lisa should look like, and your customer just said, “no” when your attempt was not a perfect recreation?
Does that sound ridiculous? Yet I am certain you have done exactly this in your life. You have tried to improve yourself, you have tried to achieve a goal or standard that you couldn’t see, that someone had only vaguely described to you and which you received only negative feedback on. How many iterations would it take you to reproduce the Mona Lisa? How many iterations would it take you to become the person who your parents wanted you to be?

Ah. Your parents, and your teachers. That’s who you’re really trying to impress. They created a benchmark for your life, a standard to compare yourself to, but they never showed you what that actually is. They only told you that you didn’t match up.

If you came home from school with a report showing that you achieved 99% in a test, and your father said, “Why didn’t you get 100%?” then you know that anything less than 100% is not good enough. In fact, he doesn’t even have to say that, all he has to say is, “Hmm” and you know that you have failed to meet your father’s standards. He might even say, “What was the highest mark in your class?” and if it’s higher than your score, you didn’t work hard enough.
You want to please your father, don’t you? He is, after all, the alpha of your social group. Disapproval could lead to rejection, and rejection, for a member of a social species, leads to death. We all have a very strong desire to fit in, to conform, to belong. Loners get eaten by predators.

You learn to apply your 100% standard to everything in life, but the problem is that not everything can be marked or scored or assessed like a school test. Your career. Did you achieve 100%? Your marriage? Your children? The car you drive? The house you live in? Your friends? Are they all 100%?

You have no way of knowing because your father didn’t give you a complete checklist of every achievement in life, so you assume that you have not achieved 100%, so you keep on trying harder, and harder, and harder and working longer, and longer, and longer until one day, someone stands at your funeral and says that you worked very hard, but they wish you had taken time to appreciate life more.

A perfectionist sees themselves as the object to be perfected, so they keep on making changes and trying to improve themselves, but they don’t actually know what the standard is, or how to measure themselves against it. Their unconscious simulation of their parent or teacher holds the standard and the measure and, because those people aren’t really measuring and giving meaningful feedback, the perfectionist runs wildly off track, resulting in dissatisfaction with life, stress and a whole range of stress related illnesses.
Your true role in life, the realistic, in-control function in this process of perfecting is that of the measurer.

A system which achieves a goal through positive and negative feedback is called a closed-loop servo system. An air conditioning unit is a simple example, where a cooling system is switched on and off until a target temperature is achieved.

Imagine a toy car which has a very simply arrangement of a motor, two wheels and some kind of sensor to direct it towards a target. The car’s guidance system doesn’t need to be accurate, it only needs to keep focus on the target.

The car is ‘off course’ for most of its journey, yet it still gets there. That’s what your behaviour is like as you direct yourself towards your goals. Sometimes, it will feel like you’re moving backwards, but that is OK; what matters is that you are moving.

When you set a goal for yourself, you must express it in terms of raw sensory data. “Success” is not something that you can see or hear or feel. It has no temperature, no pressure, no weight, no colour. Waiting to become successful, and striving to be successful, is a pointless, endless search. You will forever go round in circles, looking for success when you don’t really know what it is that you are looking for. For most perfectionists, what they really, really want is to hear one person say, “Well done, I’m proud of you” and their search would end.
You might think that such a search is a good thing because it makes you ‘driven’. That’s certainly true, but driven where? As you reach the end of your life, will you say, “Ah well, at least I was busy”? No, you will judge yourself by your achievements. Busy people achieve little.

You’re not supposed to meet your standards.

In 1791, after some debate in France, the metre was defined as one ten-millionth of the length of the meridian through Paris from pole to the equator. The scientists made a standard metre, a metal rod, that could be used as the standard, however it was short by 0.2 millimetres because researchers miscalculated the flattening of the earth due to its rotation. Even though the standard was ‘wrong’, it still became the standard.

In 1889, a new prototype was made of an alloy of platinum with 10 percent iridium, to within 0.0001mm measured at a temperature of the melting point of ice. In 1927, the metre was more precisely defined as the distance, at 0°C, between the axes of the two central lines marked on the bar of platinum-iridium kept at the International Bureau of Weights and Measures.

In, 1960 a new definition was created, based upon a wavelength of krypton-86 radiation.

In 1983 the General Conference on Weights and Measures created a new definition: The metre is the length of the path travelled by light in vacuum during a time interval of 1/299792458 of a second.

How are you supposed to be perfect if we can’t even settle on a definition of a metre?

Standard units such as the metre, the second and the gram change over time because our measurement technologies become more accurate. However, there will always be a margin of error, always, and that is why you will never achieve perfection.

Our copies are not supposed to be the same as the original, because there will always be a margin of error in our measurements. What we therefore aim for is for that margin to be as small as possible, and to be as consistent as possible so at least all of the copies are the same. Ish.

However, there is good news, and it should be the most obvious point of all.
You are not a copy.

We might therefore define a perfectionist as, “Someone who has forgotten that he or she is unique.” The next time you’re dealing with a perfectionist, ask them who they are comparing themselves to, and with what standard of measurement, and help them to see the breathtaking beauty in their originality.