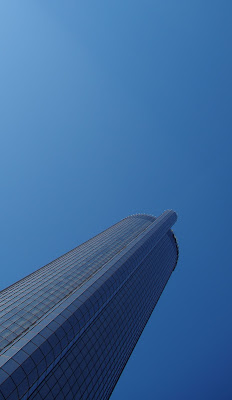 'The glass ceiling' is 40 years old, but I believe it has evolved, now there are two. The glass ceiling that Marilyn Loden spoke about was a barrier of discrimination, and now that barrier is dissolving. Maybe some people think not quickly enough. Certainly when the Mayor of London says that he's working hard to remove the gender pay gap, some people think that all you have to do is give women a pay rise. Critics say it's not that easy. I tend to think it is - though it does hike the wage bill significantly.

When companies such as Hugo Boss 'accidentally' submit the wrong data on their gender pay gap reports, implying incorrectly that they pay everyone equally (until challenged by the Government Equalities Office), it does make it seem less likely that this is going to be resolved any time soon.

However, the thing about a glass ceiling is that it is transparent from both directions. Organisational managers have always known that there's a pay gap, so why has it been allowed to persist? Simply, because if managers can get away with paying people less, they will do. And when "it's the way things are", who has the courage to make a fuss? If you push too hard at the interview, they'll hire someone else, and once you're hired, it's almost impossible to change. Just try getting a pay rise over the rate of inflation.

So the situation persists because that's the way the system is. As soon as you hire someone on an equal pay basis, everyone else in the organisation cries foul. So yes, from the point of view of salary costs, it's something that has to change gradually.

But this is a situation that affects millions of workers, who are paid less for all kinds of reasons, despite producing the same output and working the same hours. This is a generic situation, and since the 1980s we've had individual appraisals and performance related pay, and that has led to a situation where no-one is looking out for your career plans. You have to do that yourself, and that in turn leads to the second glass ceiling.

For all your working life, you have been rewarded for doing certain things. Perhaps for being a super salesperson, or a tough manager, or an aggressive buyer. Every time you got a pay rise or promotion, you thought that was the reason why. Eventually, you will reach the stage where the qualities that got you to where you are become the very things that prevent you from getting any further. At a certain stage in your career, you have to reinvent yourself, and that means letting go of all the things that you've been rewarded for until now, which are all the things that you think you value most about yourself.

In order to move forwards, you have to let go of the familiar, you have to step off the edge. Maybe, we can all do that together.

Peter Freeth is a talent expert and author, currently working on a new book that helps high potentials to get noticed and achieve their career aspirations.

You can help with the research for the book (and even get a credit) by visiting the Genius website and completing two short surveys.