Coaches Ask Too Many Questions

Coaches ask too many questions. Far too many. They are obsessed with questions, to the point that they are afraid to give advice. I even heard of a coach who failed her ICF certification for giving advice in her assessment coaching session.

The ICF lists 'asks powerful questions' as part of their 'credentialing' criteria. Some people even say that asking good questions is what marks out a coach as being different to a mentor or consultant.

Maybe we should take a step back and ask what the purpose of a question really is.

Questions are designed to get information from someone. And therefore, a question leads to an answer, and that answer represents what the coach wants to know about, not what the client wants to talk about.

Even an innocent, 'open' question such as, "Can you say more about that?" is a leading question. The client has already told you exactly what they want you to know. They used the precise number of words that they needed. When you ask them to tell you more, they are now saying more than they planned to, which usually means that they will simply repeat themselves, or throw you a bone to lead you off in a different direction. They told you what they told you for a specific reason - it was exactly what they wanted you to know, so that you would give them the response that they wanted.

Each time you ask a question, you change the subject.

The presupposition of the question is exploited by people who seek to influence. "Why are you thinking of hiring me as your coach?" is an obvious, and perhaps clumsy example. "What are some of the things you look for in an excellent coach?" is a more subtle one.

From an early age, as your brain created an abstract map of the world around you, you created a 'critical filter' to protect you from other people's maps. 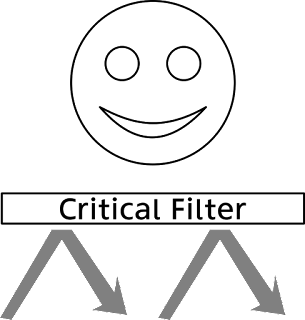 Imagine that you have a problem at work. You go home and talk to your family who then give you advice. "You should do this", "You should try that", "You should tell your manager" and so on. You reply, "Yeah... but", "You don't understand", "It's different", "I've tried that", and so on. Your critical filter is working perfectly, deflecting the advice because you already know what to do. You might even say, "I've tried everything and nothing works", when what you really mean is that you know what you have to do, but you're scared to do it.

Your family, friends and colleagues have the best intentions when they give you advice. They pick up on the presupposition that you unknowingly transmit - that if you're talking about a problem then logically you have not solved it, so logically you don't know how to solve it. Therefore, they ask you questions to gather facts so that they can perform an analysis and deliver a solution to you.

Professional influencers, expert public speakers and people who are 'good with people' know that there are two simple communication methods that you can use to bypass the critical filter. 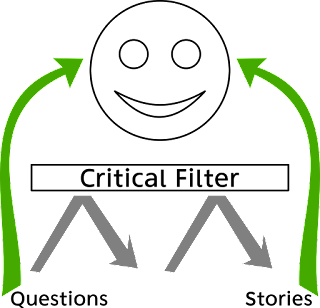 Stories are not blocked by the filter because they are not about you, and don't tell you anything which conflicts with your map of reality. Stories are explicitly about someone else's map of reality. However, in order to understand the story, you put yourself into it, and it therefore becomes part of your map. If you have ever felt an emotional response while reading a book or watching a movie then you have experienced this process.

Questions bypass the critical filter because they do not explicitly carry information, however the presupposition within the question does exactly that, so now you can see why I called it a 'payload' earlier. The presupposition, hiding within the question like an army inside a giant wooden horse, slips past your critical defences in the dead of night and quietly infiltrates your map of reality.

Let's join the dots and come full circle back to coaches asking too many questions.

A coach asks a question because they have an intention.

The coach reveals that intention through the presuppositions in their questions.

The coach delivers that intention in the payload of their questions.

The coach influences the client through their questions.

Whether you like it or not, as a coach, you are actively directing your clients.

Is this a bad thing? Of course not. If the client could get what they want by themselves, they wouldn't be talking to you. However, to pretend that you are 'non-directive' or that 'the client guides the direction' is misleading. As a coach, you absolutely guide the client, you actively manipulate them to where you want them to be.

As a coach, if you have something to say to your client, be honest and say it. Don't dance round in circles trying to get the client to say it by asking them manipulative questions, just because you believe you shouldn't be giving advice or unsolicited feedback.

When you enter into a coach/client relationship, you are put into a position of trust. The client accepts that, to get to where they want to be, they have to cover some unfamiliar or uncomfortable territory, and to do that, their existing maps will be useless. Sometimes, they are asking to be led, sometimes to be pushed, sometimes simply to know that they are not alone on their journey.

If you're not going to give the client advice or feedback, who else are they going to trust enough to do that?

Posted by Peter Freeth at 08:19 No comments: