Coaching as a Performance Art 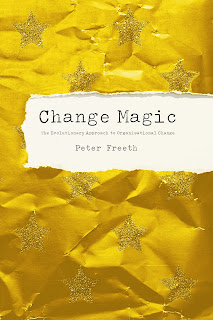 Can a business book be a work of art?

We might say that great works of fiction are works of art, but what about throwaway airport romantic fiction, where the publisher churns out the same book every year with different names and a new cover? Is that art?

A design can have artistic merit, but if we mass produce that design, is the resulting product a work of art?

Art must be unique, and it must arise from a moment in time where ability, resource and inspiration come together. No artist can create by sitting in a dark room, thinking long and hard about what they will sculpt or paint or write next. Artists go out into the world and wait for the moment of inspiration to come to them.

I propose that a business book can be a work of art, and each copy of that book can be like a print you might buy from an art gallery. Not limited edition, but nonetheless a reproduction of the artistic process.

Actors talk about the 'fourth wall' which separates the actors from the audience. The actors are engaged in their scenario, oblivious to the voyeurs who watch from the cheap seats.

A trainer might give a demonstration at the front of the class, and forget that the audience is watching. Personally I like the style of performers/characters such as Groucho Marx or Deadpool who break the fourth wall and speak directly to the audience, as if sharing a secret that the other characters don't have access to.

When I perform a demonstration of a coaching process, for example, I frequently stop to tell the audience what I'm doing, so that they can pay attention to the most important points for their learning. If I simply perform the entire coaching process or technique, the audience doesn't know what to look for and they don't know what to practice, so their learning is impaired.

But this is a different, and more obvious kind of performance.

During a coaching session, is the client the audience? Or is there an imaginary audience, watching from the sidelines?

Your client is paying for a performance.

The techniques of coaching are irrelevant. If you think that the coaching model or the 6 step whatever are where the magic happens then consider an operation such as McDonalds. Would you like an apple pie with that? Their system is not designed to deliver excellence, it is designed to deliver conformity, consistency. The questions that you ask and the steps you take the client through to explore their goals are irrelevant. They are the baseline, the means, the props, the backdrop, the script.

The performance is what you add, over and above that script, and it is unique to you, crafted from your personality and, most importantly, unique to that moment and that client.

The client provides the fleeting moment of inspiration which transforms, transcends your work into an art form.

Learn to see yourself, not as a facilitator but as a performer.

I'll be running a Coaching Masterclass in Mumbai, 30 April to 3 May 2016, and that will be the first time that I'll be teaching you the art of performance in coaching. Beyond that, I'll be including it in NLP Trainer Training from late 2016 onwards, and in other Masterclasses.

Email ThisBlogThis!Share to TwitterShare to FacebookShare to Pinterest
Labels: Coaching