Today, I attended an event organised by the CIPD to explore the future of work. It was heavily biased towards the UK of course, with our typically imperialist attitude towards globalisation. “Oh no! Globalisation is taking our jobs to the Far East!” No concern for the damage that our working practices are doing to other cultures, though.

But enough of that. The big question was about the future, and in particular what role HR professionals play in the workplace of the future. One of the interesting questions was about the impact of Artificial Intelligence. Robots, in both mechanical and software forms, will replace many menial jobs and take control out of the hands of mere humans.
Except they won’t.

Let’s understand what AI is. It’s a fancy name for decision making software, and that’s been in use for 30 years. Its predecessor, the flowchart, has been around for longer. AI is an abstraction of a human ability, taking a set of rules out of a human brain and putting them into an external tool. In that regard, AI is no different to an abacus or spinning wheel. A tool, by definition, has its purpose, and is only activated when that purpose must be served. I wear spectacles, but I don’t wear them when I am asleep. Or in the shower.

Help desk software, for example, has been around for a long time, enabling self-service by customers, ‘improving’ service through faster response times and reducing costs by removing humans from the service chain. After all, what difference does it make whether a human or a machine tells you to switch it off and back on again?

“Big data” is simply the use of greater storage and processing power to include more data points in statistical analysis. It doesn’t dictate what we do in our lives, and it doesn’t mean that the machines are making our decisions for us.

One way that we can predict what the world of work will be like in 2030 is to look at what it was like in 2004. Hmm. No different, really. 13 years either way, and I’m still typing on a laptop on a train. OK, so I paid for my lunch with a contactless card and my train ticket is on my mobile phone, but these are gentle, iterative changes. I’m still drinking tea and eating biscuits. People are still moving from one place to another. We are not all sitting at home with our brains plugged into a computer network that creates our reality. OR ARE WE? No, I don’t think we are.

What, then, are the big themes affecting employment? The ‘gig economy’ is a response to diminishing job security, which is a response to the drive for greater organisational flexibility. Well, if employers are going to hedge their bets, employees are doing the same, because employers are employees too. We all want ultimate security and ultimate flexibility. I want a job for life when and where I want it, and when I’ve had enough of it, I want another job for life. We all want one-way commitment. The only difference with millennials is that they’ve been told that they can have it. They’ve been told that they have a right to it.

Through the mass redundancies of the 1990s, technical people in particular converted their employment contracts into short term self-employed contracts where they found they could get paid for their expertise instead of their presence and they could take every Monday off if they wanted to. The redundancies of the late 2000s dumped a whole new group of people onto the contract/freelance market, and further weakened the whole employment proposition.

Let’s step back from AI and look at technology in general. McDonald’s have been refurbishing their ‘restaurants’ and replacing customer facing staff with giant iPads. Instead of asking a human being for a McBurger and chips, you tap a screen and then wait at the order point. It’s fast food meets catalogue shopping. When they call your number, it’s like winning the lottery. “Number 97! That’s me!”

What’s interesting is that the level of interaction between staff and customers is now almost non-existent. In the old days, you could have a chat, maybe a bit of banter as you enquired about the number of chicken nuggets in a box, or what flavour sauces are available. 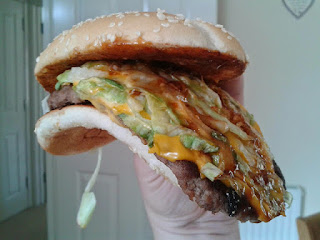 The logical next stage of evolution is for food to be produced and delivered mechanically. Why not do this now? Because the visual feedback required to make sure that the delivered product looks nothing like the photo on the ordering screen is beyond our programming ability. Rest assured, this will happen. If you can get sandwiches out of a vending machine, there’s no technical reason not to get a freshly warmed burger and an apple pie with that.

The systemisation of processes means that we don’t need to train people to know when a burger is cooked, we only need to make sure that the burgers are identical, the oil is at the right temperature, and the burger is in the oil for the right period of time. Machines didn’t put us out of jobs, people did. Not evil corporate executives either. We did it. Customers. Every time we chose the cheaper option, we put someone, somewhere out of a job. Businesses exist to make money, and to do that they have to make profit, and when consumers demand lower prices, those profits have to come from somewhere.


We’ve been told that we can everything we want at twice the size and half the price, and we were stupid enough to believe it. Now we’re paying for that spiral of demand.

I was asked to share the greatest personal contribution that I had made. It’s nothing in particular, it’s just the ongoing process of sharing knowledge. We seem to have become obsessed with extending our individual lives at the expense of leaving the world a better place for our children. That’s the goal of any species, and technology has made us forget why we’re really here. We live to learn, to nurture, and to die. We spend our lives figuring stuff out and we can’t bear the idea that all of that is lost when we’re gone.

So protect the future, share what you know. Whether you’re teaching children or programming robots, you’re working to the same aim. Don’t fight AI, or whatever the next big thing is, devote yourself to it. Take your lifetime’s knowledge and make it permanent.

Be proud of what you leave behind.